Drawdown as a measure of risk. There are several ways to express risk but one way most investors understand is maximum drawdown or the largest peak to trough drop for an asset in a given period.

Information Technology and Consumer Discretionary, top performers, Consumer Staples and Health Care, least risky? While the S&P 500 Index has generated an average calendar year return of almost 15% since 2011. Information Technology and Consumer Discretionary have generated average calendar year returns of 22% and 18%, respectively. In terms of risk, Consumer Staples and Health Care were the two sectors that suffered the least severe calendar year maximum drawdowns on average.

Energy, riskiest sector, worst performer. Over the past 10 calendar years, the energy sector has most often experienced the largest maximum drawdown. On average, the energy sector has suffered a drawdown of 25% each calendar year dating back to 2011 and a negative average return of approximately -1%. Real Estate and Materials also lagged by generating average returns of 9% and 10%, respectively.

How to allocate to reduce risk? Equity investors seeking to limit risk, may want to consider how much they allocate to Energy stocks, the riskiest sector over the past 10 years. 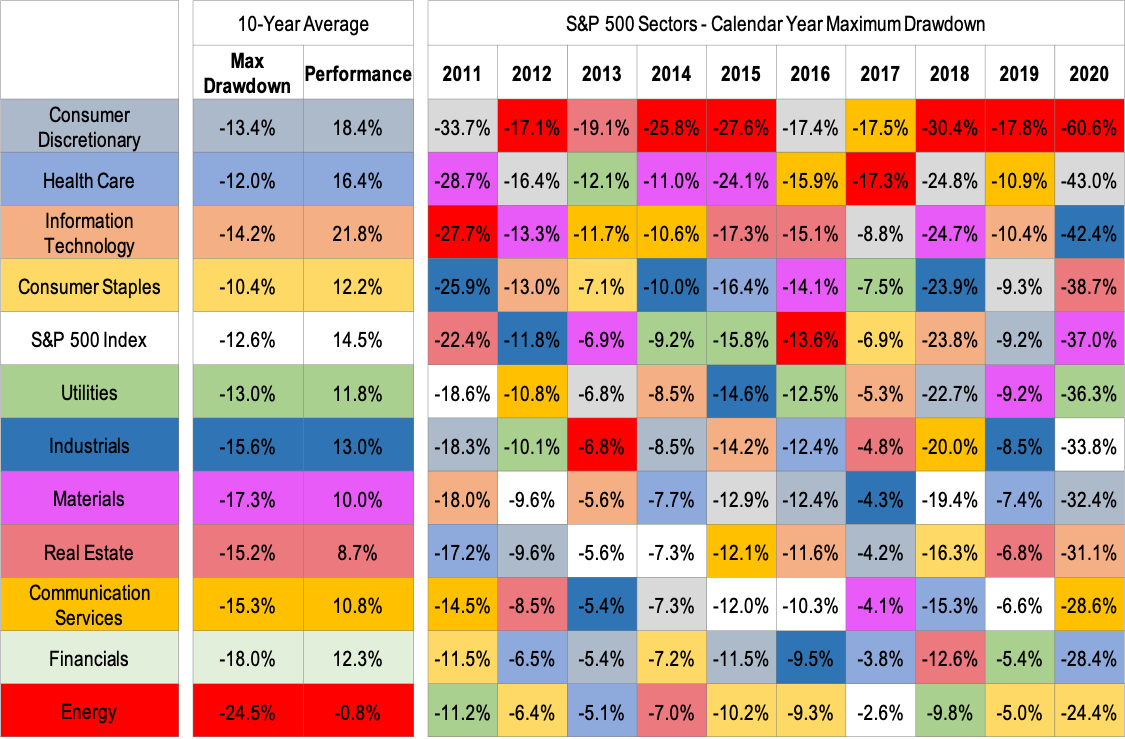 Source: Bloomberg Finance L.P. Data as of 12/31/2020. Investors cannot directly invest in an index. For informational purposes only. Not meant to represent the Fund. Past performance does not guarantee future results.

Aside from the global pandemic, OUSA suffered only 1 pullback greater than 10% in the past 3 years. Investors waiting for a pullback to invest could have missed big returns. 13.5% annualized 3-year return: OUSA generated a cumulative return of 46% for the 3-year...

Hidden Dangers of the Value Rotation Value stocks are those that appear to trade at a low price relative to their fundamentals. They tend to exhibit characteristics such as low price-to-earnings-ratio, low price-to-book ratio or high dividend yields. Value investors...

Comparing 10-year return and risk data for the 11 sectors in the S&P 500, several observations can be made. The sectors with the lowest volatility in the past 10 years were Consumer Staples and Health Care. The highest volatility sectors were Energy and Financials....

Our Next Livestream Starts In

O’Shares Livestreams are usually on Thursdays at 11AM ET. Topics include current market investment themes and internet and dividend related research.